The night he "practiced his whole life for"

We got a phone call asking us if Madden wanted to be the Screaming Eagles 7th player at the hockey game!

When I finally decided to tell him (which I wasn't' going to in fear he wouldn't sleep with excitement!), he just stood there in stunned silence.

What does that mean?


Well, you know when the starting line up comes out & lines up for 'O Canada', then a little Eagle comes out? Well, you're gonna be that little Eagle tomorrow (Friday) night!


Wow. I've waited and practiced my whole life for this! Remember when I was standing right there when I was two and you took a video of me doing this to O Canada?! Now I get to do it!


And so he did! With his favourite player, Jason Bell #4. 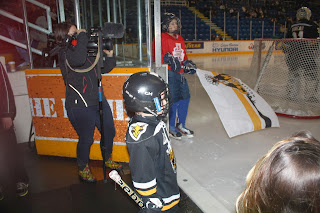 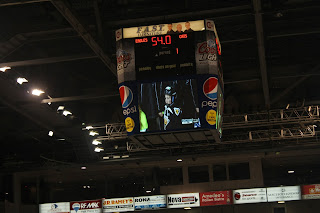 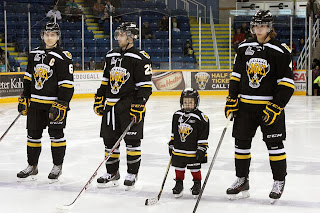 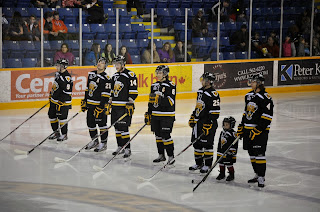 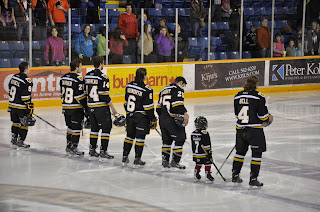 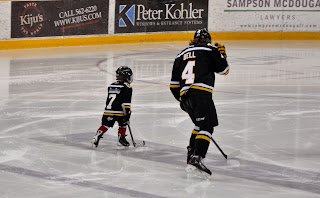 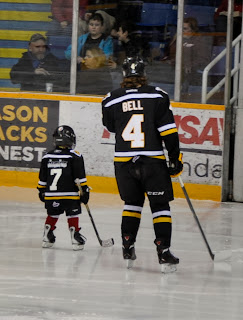 I love hockey. I want to try to be a better hockey player and make lots of goals. And I hope I will be a better listener. (Geez, he’s gonna like this one!) And I’m done writing about my presents cuz somebody else might get some presents for me. What?! People do that kind of thing.

I want you to have some chips and Coke pop when you come to my house.  Oh! And you have to take a bottle of Dad’s wine home to your wife. I hope you have a good time!

This month's edition of the Madden Gillis Hockey News 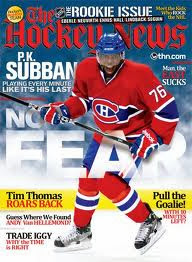 Madden's debut in an Eagles jersey! 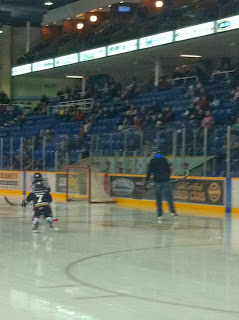 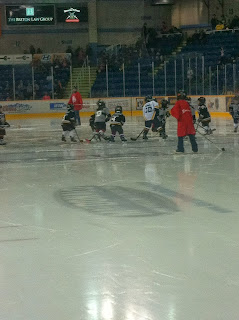 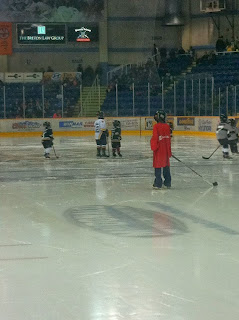 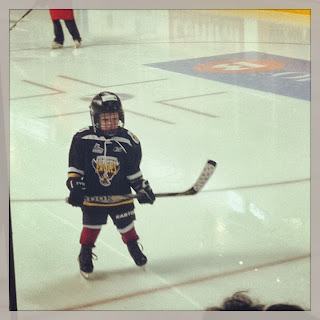 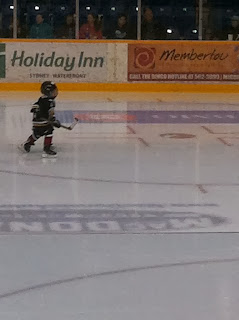 Madden had his first turn at being a Timbit at a Screaming Eagles game on November 16th. His excitement and nervousness was almost uncontainable!!! 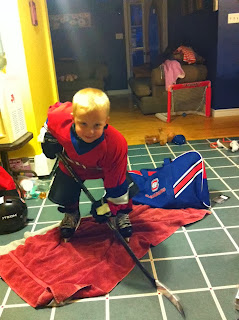 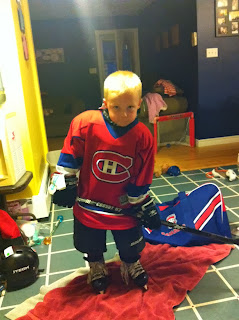 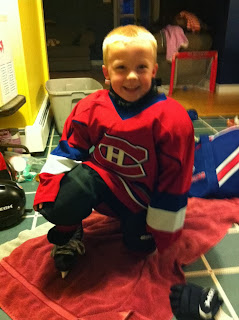 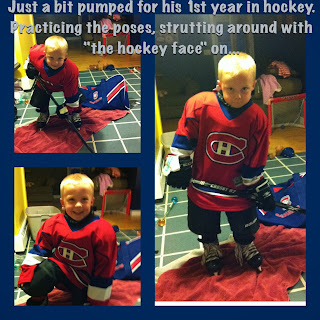 Some pics from Madden's first day of hockey, September 2013 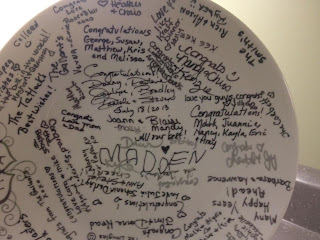 Madden's final thoughts on the family reunion, playing with cousins, being exhausted, etc:
"I can't figure out why they called him 'Milk-um' (Malcolm). Do they think he came from a cow or something?" Yep. Lol.

Omg ---they are the sweetest little set of cuties ----they were so excited and so good all night ----laughed. Giggled , and never missed a trick -----That Madden is friggen priceless ----when we got home there were two raccoons at my garbage can ----mr pipes up and says """oops mom and dad are here "" ahead of me -and laughs his guts out !!

Totally impromptu step dancing lessons in the kitchen with Madden. "I already know how to do my jiggities... and da udder one is like this 'Toe shuffle bang bang'... or is it 'Toe shuffle hop bang?!'"

Madden came home from Playgroup today with this creation, which he told me was Uncle Dale. I think the resemblance is uncanny. Especially those Apple Bottom Jeans  lol 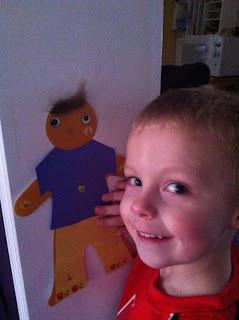 So, Madden was explaining to Kyle Gillis how he was at "The Dome" yesterday. Kyle keeps saying, "Where?!? Where?!" And Madden's trying his best to explain where it is by the "see doughs windmills" (aka CBU... which is also a dig at Ma). Kyle pipes up and says, "OH! The Liquor Dome! You were at the Liquor Dome!" To which Madden replies... all annoyed, "NO! There's no ice cream there!" LMAO

Too smart for his own good, in my humble opinion....

Posted by Dawn on Saturday, May 25, 2013
Labels: laugh, Look at me now, madden, milestones, saying, talking / Comments: (0)
While playing in the living room we were pretty sure we heard a certain F word being uttered by his little voice.

"DID YOU JUST SAY THE F-WORD, MADDEN?!?!" Kyle exclaims


"I accidentally said the F word. But I meant to say I wanted a drink. I didn't mean it. I PROMISE...." and he continues, just to smooth things over, "And really, when you think about it, it sounds a lot like another F word... FART!"


Then he proceeded to explain the phonetics of both to Kyle. LOL

Reflections on his sister's 1st Communion


Now... What were we talking about again? LOL

Think his quick mouth is gonna get him in trouble?

Posted by Dawn on Thursday, April 4, 2013
Labels: Dadaidh, laugh, Ma, poor mom, saying, talking / Comments: (0)
Madden had to go to Ma's the other day as I didn't have a babysitter.
Anyway... they had a great day. (see post below that kind of explains part of that)
But when I landed to pick him up, he got all feisty and cranky and cocky.
At one point he got mad at something Ma said and rifled a dinky at her, just missing her head & the TV.
She started into him...

The little frigger stood there blank-faced... unphased... and retorted:

Which, as you can imagine... caused Ma to light into him again... even sterner... right in his face, finger pointing and all...


And completely unphased... confident as can be, he interrupts her,


Has anyone ever told you you have a moustache? Especially right there on that side? (pointing)


I almost died. Ma realized that it was a no-win situation and gave up and started laughing, too.

Here's the part that I mentioned above:

So, Madden was explaining to Kyle how he was at "The Dome" yesterday. Kyle keeps saying,
"Where?!? Where?!" And Madden's trying his best to explain where it is by the "see doughs windmills" (aka CBU... which is also a dig at Ma).

Kyle pipes up and says,

To which Madden replies... all annoyed,

"NO! There's no ice cream there!" LMAO

Sticking your nose in hockey?

Posted by Dawn on Tuesday, February 12, 2013
Labels: goalie, Habs, hockey, poor mom, screamingEagles / Comments: (0)
Last night the bday boy went to bed, happy as a pig in it...snuggled up in new pjs. He managed to sneak his Carey Price & PK Subban figurines in there... along with a Lego "puck"... because you know, it's all hockey... all the time... even when he sleeps. So, this morning, he comes downstairs explaining to me how we're going to have to get another TV so he can play NHL'13 on the Xbox "all the long day" (last night it was Eagles vs. Victoriaville in our basement -- he nearly lost his mind!). And then he sneaks in this little quip:

And he preceded to explain playing hockey in bed last night, when

"Carey Price missed the save and the piece of Lego ended up in my nose.."

Sure enough... a nice little yellow flower piece of Brenley's Lego... lodged in "the little hole part now" of his nose.
Dr. Mom got it out... but this kid has no boundaries when it comes to his hockey, I tell ya!

Posted by Dawn on Monday, February 4, 2013
Labels: friend, goalie, Habs, hockey / Comments: (0)
Yeah, I know. I know it's not normal that Madden is playing hockey here in the kitchen, conversing with his imaginary friend, Budaj, who just happens to be the back-up goalie for the Habs. Apparently Budaj hates the game today. 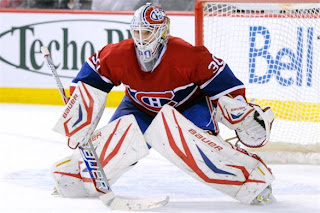 Posted by Dawn on Tuesday, January 22, 2013
/ Comments: (0)
Apparently, a mother's touch is no longer wanted by this little boy. Over the course of a few months, I've been not-so-gently told that I was only to give Madden pogs ("pocks" or kisses in Gaelic) when he was snuggled tightly in bed. Pfft. Then, the little monster started snuggling with Daddy all day long, giving him pogs whenever he was sure I might be watching. Hard on a mother's heart.

So, the other night, Madden was all snuggled into bed. I dove in to give him a kiss. Not much of a problem. Then I asked him to give me a pog; he wouldn't. So, I proceeded to ask why it was such a problem, and how it hurt my feelings, and how he was still my little boy... to which he responded,

"Oh for God's sakes. Can we stop having this conversation? It's getting awkward!"